Desolate and dangerous describe the desert terrain just on the outskirts of Las Vegas. But for adventure seekers, the vast, rugged and unforgiving landscape is a playground for all things off-road. Recently, as part of a small group of media outlets with varying degrees of SxS experience, we had a chance to play in it with the all-new 2022 Polaris RZR Pro R and Turbo R. The conditions on the day we drove were miserable – cold, windy, overcast, and a day removed from rain, but still dusty, which made visibility poor at certain points on the trails. After all, you can never escape the desert dust.

Despite the harsh conditions, once we were buckled in, any reservations we had went away, and the adrenaline and fun vibes kicked in. Our small group of high-performance Wide-Open RZR Pro Rs, Pro R 4, and Turbo R all dressed in Polaris’ top-of-the-line Ultimate trim left the basecamp of Vegas Off-Road Tours and caravaned out into the wild. Once we were out in the open, we were able to let ’em rip and see what these new machines were all about. The initial thought of the new Pro R… pure power!

The Pro R is powered by their new naturally- aspirated ProStar Fury 2.0L, four-cylinder motor that pushes out a whopping 225 hp and a top speed of 90 mph. With a dry weight of approximately 2,085 lbs., it moves (and we mean really moves) due to its high power-to- weight ratio. Coupled with a larger clutch and belt, the result is insane power to the ground with instant response and fast acceleration. The Pro R has three selectable (and self- explanatory) throttle modes – Sport (cruising), Rock (crawling), and Race (haul ass)- that all ensure that power is there when it’s needed most and how it’s needed.

The Turbo R is no slouch, either, with the proven performance of its 184-hp turbocharged 4-stroke DOHC twin-cylinder motor. Weighing in with an approximate dry weight of 1,943 lbs., the Turbo R is an absolute blast of a ride. It’s snappy and incredibly agile. It was particularly nimble in the twisties and responsive to the terrain, with no signs of turbo lag. Although selectable throttle modes weren’t available in the Turbo R, it didn’t skip a beat in any of the varying situations we were in.

For years, RZR has led the industry in side-by- side performance, taking feedback from current owners, racers and their own R&D teams, which shows in these new machines. At first glance, you’ll notice the massive fully boxed steel A-arms and wider stance, similar to those you’d see on long travel or race trucks, which is a first for factory suspension on an SxS. The redesigned A-arms allowed for the use of longer shocks by being able to mount them to the lower A-arm, which lowers the center of gravity and also increases the driver’s sightline.

They call it their MaxLink suspension and use strategically reinforced stamped steel construction for added strength for the arms, double-shear joints and M14 bolts throughout to take on the roughest terrain. The rear setup features an industry-first adjustable toe link that passes through the trailing arm and connects to the frame which helps minimize bumpsteer. The one-piece chassis stiffens the frame of the two Rs and optimizes all the other components to perform as they should while blasting through the rugged and varying terrains. They also feature unitized hubs that help keep the wheel bearings clear of dirt and debris while housing triple-bore front and dual-bore rear calipers with aluminum top hat rotors. Enhanced driveline shafts and knuckles were added, allowing drivers to push the limits. On the Pro R, this next-level one-piece chassis is coupled with a fully-welded roll cage. They are also now equipped with five-lug 15” wheels, which are better equipped to handle more pressure and high performance than the previously used four-lug wheels. Both are paired with 32” Maxxis Rampage Fury tires.

Power is useless without control and despite these new RZRs wielding the power they did, it didn’t take much seat time for everyone to get a feel for how much they could personally push the vehicles they were driving.

The new FOX 3.0 Live Valve X2 Internal Bypass shocks paired with their new-generation DYNAMIX DV (dual valve) active suspension technology is the most advanced in the industry offering the first and only independent compression and rebound control system. It allows for more modes than previous generations and was designed specifically for these machines. On the fly, suspension mode is selectable via the Ride Command touchscreen, which also allows for monitoring all four corners.

The four modes available are Baja, Track, Comfort and Rock, which all adjust shock damping and steering response for the terrain you are in. For most of our ride, we were either in Baja or Comfort mode. When we were on it and hitting the trails at speed (or at least we thought) as Baja mode lifted the ride height, stiffened compression and lowered rebound damping to optimize the shock performance in tackling massive whoops and fast turns. It was very impressive and gave us the confidence to push a little faster. But pushing faster also leads to “oh sh*t!” moments on the trail when we came up fast on a g-out, dip or anything that would bottom out the suspension and possibly do damage. Luckily, there is a red oh “shi*t button” on the steering wheel for when those situations come at you. Simply press that red button and it instantly adjusts to full firm compression damping to soak up the hit and goes back to the mode you were in once released.

This suspension system they have developed and tuned for these machines is simply incredible and will not leave you wanting more.

Adjustability and being comfortable in the cockpit is also key to control when you’re hard-charging the trails. From the tilting and telescoping steering wheel with customizable controls to the 7” Ride Command touchscreen, everything can be tuned to you. The bucket seats are bolstered and slide forward, back, and can be tilted to fit your perfect driving position and in the four-seaters, the rear seats fold down for more storage.

Once in position, you can easily reach Ride Command which shows your Dynamix DV inputs, Bluetooth for texting, calling and most importantly streaming your music to the Rockford Fosgate speakers. The GPS system ups the connectivity factor and works without a cell connection. It has the usual route planning and sharing of routes, the ability to track friends, and a new follow-the-leader mode that allows your group to follow you on a digital trail you blaze. More shoulder and legroom accentuate the experience for driver and passengers as well. The Pro R and Turbo R also already have a full line of accessories available from the factory to customize them to your liking.

The Pro R and Turbo R are game-changers that redefine the off-roading experience with their power, strength and control – ready to go, straight from the showroom floor. They push the limits of what the most demanding veteran off-roaders expect, all while allowing less experienced drivers to gain confidence and level up their off-road skills.

AS FEATURED IN ADVENTURE RIGS ISSUE #9
CLICK HERE TO ORDER YOUR ISSUE TODAY! 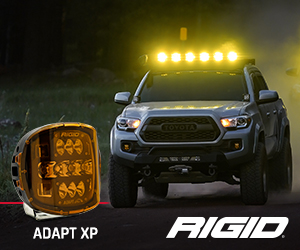 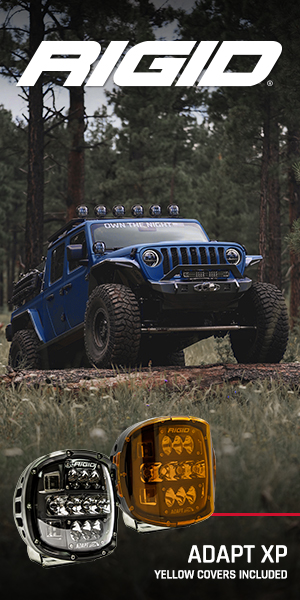